If you love the RuPaul's drag race series, then you'll love these themed events where you'll spot a familiar face or two! From bingo to fun lively shows, you're bound to have an incredible time!
Loading...
Added to Wishlist!

Save 54%!
IN HIGH DEMAND!
Added to Wishlist! 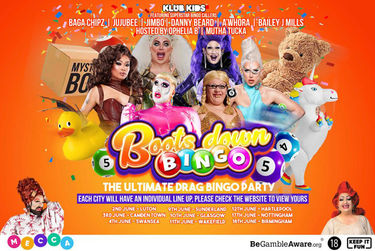 Save 48%!
IN HIGH DEMAND!
Added to Wishlist!

Get ready to dance long into the night with RuPaul's Drag Race season 3 pick 'n' mix group! You can expect to see Ella Vaday, Choriza May, River Medway and Vanity Milan giving you their best performances. It's an action packed show that may even feature other drag artists, so you won't want to miss out!

If you're after a night of glory, glamour and glitter, then this is the event for you! You can expect to see drag queens including Jimbo the Drag Clown, Scarlet Bobo and Ursula Major. There will be innuendos, filth, gags and plenty of laughs, definitely a night you won't want to miss!

Fancy a different kind of bingo game? Then you'll love Mecca Bingo's RuPaul's Drag Race Boots Down Bingo! There's a whole host of international drag stars who will be ensuring you have a great time. Expect comedy and craziness from RuPaul's Drag Race's very own Ophelia Balls and Coco Vadose!