We have plenty of deals on the best West End hotels, so you can be right at the heart of London's entertainment, theatre and shopping hub! So get ready for curtains up, grab those shopping bags and prepare to be truly dazzled!

Save up to 74%!
IN HIGH DEMAND!
Added to Wishlist!

Save up to 34%!
Selling fast!
Added to Wishlist!

Save up to 36%!
Selling fast!
Added to Wishlist! 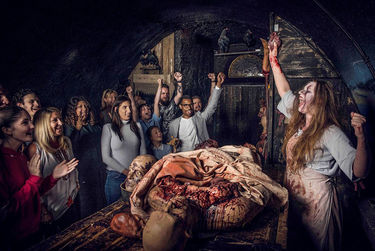 1. Back To The Future: The Musical

Great Scott! It's time to get in your Delorean and revisit the past by going Back to the Future with this brand new musical! Taking to the stage at Adelphi Theatre, this new and exciting take on the time-bending 1985 classic is sure to blow your mind, especially with the original movie's creators Bob Gale and Robert Zemeckis behind the wheel. Plus original music by multi-Grammy winners Alan Silvestri (Avengers: Endgame) and Glen Ballard (Michael Jackson's Man in the Mirror)!

Don't worry, about a thing ... This exciting new production comes to life at London's Lyric Theatre and celebrates the story of one of the most iconic global superstars of them all, Bob Marley. Combining his incredible story, his sensational music, a euphoric company of performers and the finest reggae musicians to give life to his musical passions and beliefs, this really is a performance not to be missed and is the perfect show for any Bob Marley fan.

Let it go, let it go! Get ready to sing your heart out at this new show-stopping performance at London's Theatre Royal Drury Lane. A talented cast re-tell the tale of Frozen - Disney's box-office hit that first graced our cinema screens back in 2013. You'll join the likes of Anna, Elsa, Olaf and Kristoff as they set off on the journey of a lifetime to save the kingdom of Arundelle from its eternal winter!

You shall go to the ball!This award-winning magical production of Cinderella at the Gillian Lynne Theatre by Andrew Lloyd Webber is not one to be missed! A new, romantic musical comedy loosely based on the original story of Cinderella but the gender relationships are rethought and an added-element of fun is dusted over. Expect an uplifting performance with exceptional design and choreography, with down-to-earth heroes you can finally relate to!

The greatest thing you'll ever learn is just to love and be loved in return. The spectacular new stage production of Moulin Rouge is a musical based on the 2001 film of the same name. Set in Paris during the Belle Epoque at the turn of the 20th century, this glitzy stage performance incorporates original songs together with popular music from Adele, Rihanna, Beyonce, Sia, Katy Perry and more. Prepare to enter a world of splendour and romance as this show is not one to be missed!

Taking place at London's Savoy Theatre, this musical is based on the beloved Julia Roberts film, following the story of a prostitute, Vivian, who meets a wealthy businessman who hires her to accompany him to his swanky social functions and business events. Despite coming from two totally separate worlds, the pair end up getting closer and closer - but can love thrive when their stories are both so drastically different? Expect a fantastic soundtrack with original songs by Bryan Adams and Jim Vallance!

After the huge success of the 2012 film and book, Life of Pi makes an exciting transfer to London's Wyndham's Theatre. This remarkable and exciting story follows the journey of a sole human survivor of a shipwreck and a stunning Bengal tiger, as they learn to co-exist together on a lifeboat and battle for survival. Featuring state-of-the-art puppetry and visuals, this stage production will leave you blown away long after the curtain closes!

This classic musical returns for a run at The Trafalgar Theatre, and the true-life phenomenon will leave a lasting impression long after the curtains close. With multiple-awards, a fantastic cast, and featuring hit songs like 'Big Girls Don't Cry' and 'Walk Like a Man', you'll be singing along in no time. This show follows the remarkable story of four guys from Jersey who seemed nothing out of the ordinary until they sang their first note together; the rest is history!>

9. The Mousetrap by Agatha Christie

This classic murder mystery is the world's longest running play, and it's easy to see why Agatha Christie's The Mousetrap has been running for so long. The performance is filled with thrills and drama, and allows viewers to experience the cunning mind of one of the world's best novelists!

Wicked is one of the longest running musicals in London theatre history. Told from the perspective of the witches from the Land of Oz, the musical is a fantastic, spellbinding show that truly immerses you in the action. The show is full of plot twists and melodrama, and it features brilliant, soul-stirring songs that you're bound to want to sing along to! It's a magical that you can't afford to miss.